The whole reason I started playing Warhammer was to keep in touch with my friends and my fiancé after I transferred to a different university. Well, my friends quit around December 2008, and Jett lasted until about April 2009.

Over the the past 10 months or so I have repeatedly tried to get Jett to return to play with me, to bash skulls like the good old days. No luck.

Since we weren’t able to be with each other for Valentine’s Day, he decided to surprise me by downloading the unlimited free trial for the weekend.

While I couldn’t be with him physically, and despite knowing that he’s not coming back to WAR, it still meant a lot to me that we were able to actually spend time together and interact in a way that phone calls just can’t pull off.

Thanks Mythic for helping to make my Valentine’s Day better.

Chickens of the Damned

I think I’ve made my undying love for Warhammer chickens quite clear. So last night when some alliance members and I went tome unlock hunting, I was more than a little excited at the prospect of flapping around lower tier RvR lakes.

One of the battlefield objectives we went to, in Ostland I believe, had a miniature cemetery. We seized the opportunity to become Chickens of the Damned, the fearsome bawk-bawking you hear in the dark of night.

A chicken for each tombstone

Our fun didn’t end there though. We journeyed to High Pass, where we lurked about the corpse of a dead NPC.

Yes, we are the grotesque chickens that haunt your dreams and your farm. 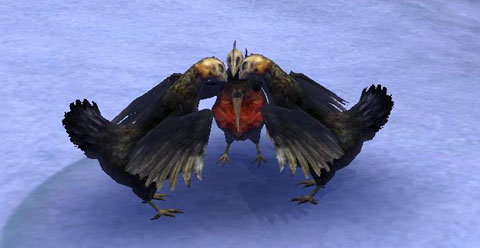 Fear the soft clucking, for it means we are plotting your demise.

Why Can’t I Be Da Biggest?

I missed out on the stability test on the PTS last night, but I was able to log into the Mythic vent to catch the tail end of the Q & A. An alliance mate asked me to put a question in my comment, but Andy and Nate had already passed by the C’s.

However, I luckily had a guildie (whose name began with T) who was in-game and in vent, and was willing to put our question in his comment.

We wanted to know if there were any plans to create bigger Black Orc models.

Andy said that he was in favor of the change and had brought it to the higher-ups, but they turned it down. He noted that they had a few reasons that he couldn’t remember offhand, but confirmed there are no current plans to implement bigger Black Orcs.

So, for now there will be no green, mean, 8-foot tall fungi tanks. What a shame.

UPDATE: Gaarawarr has screenshots up of what the weapons look like when equipped. Some of them are pretty intense.

My alliance mates were all chit-chatting in Vent about the new royal weapons and shooting requests at the lone player logged in the PTS. So, for them and whoever else is interested, here are links to the new weapons for Destruction.